The people of Israel worldwide are preparing for the burning of the chametz as the final step before celebrating Pesach. Rav Avraham Yitzchak HaCohen Kook ZT”L wrote a number of inspirational letters to Israel on the eve of Pesach between 1933 and 1935. A selection from these letters were crafted together for the introduction to the Rav Kook Haggadah that was first published in 1948. It was entitled ‘Our Freedom and the Burning of the Chametz’.

Its message is as timely as ever. Let us review it as we approach Chag HaCherut/The Festival of Freedom:    “Freedom and the burning of chametz symbolize the festival of geula/liberation, the festival of Pesach, the time of our freedom. What can we learn from these two interdependent concepts?

The eternal answer is that that there are two conditions required for redemption:

One is physical emancipation from any foreign subjugation, from any force which enslaves the Divine image in the human by diminishing its value, its splendid majesty and noble sanctity.

These two types of freedom cannot be achieved, neither by the individual nor by the nation as a spiritually unique collective, without the banishing from one’s domain of everything which inhibits freedom, namely the chametz in the dough, whose threat is greatest when the light of redemption is flickering.

We must learn to appropriate for ourselves that great spirit of liberty which shone upon us in our radiant periods, which blazed like lightning amid the first redemption from Egypt.  The Sovereign of sovereigns, the Holy One, blessed be He, appeared to us then in His great glory, drew us near to His service- which is our absolute freedom- and lifted us from the degradation and empty toil of foreign bondage.

The difference between the slave and the free person is not merely one of social status. We can find an enlightened slave whose spirit is free, and, conversely, a free person with the mentality of a slave.

Intrinsic freedom is that exalted spirit by which a person- as well as the nation as a whole- is inspired to remain faithful to their inner essence, to the spiritual attribute of the Divine image within. It is that attribute which enables one to feel that their life has purpose and value.

A person with a slave mentality lives life and harbors emotions that are not rooted in their essential spiritual nature, but in that which is attractive and good in the eyes of another, who thus rules over them, whether physically or by moral suasion.

We are called to the inner light of this essential freedom. ‘Engraved upon the tablets’ (Exodus 32:16). Do not read charut/engraved but cherut/freedom. By the inner light of this essential freedom, we will move forward to increasingly assert our vigorous inner independence. This independence was  acquired through the revelation of the Shechinah/Divine Presence, when HaShem delivered us and our ancestors from Egypt to everlasting freedom.

Let us go, brothers [and sisters] to the seder together. Let us recognize that we are children of royalty, a nation whose eternal destiny is freedom, that Israel is neither a servant nor a homeborn slave nor an object of contempt.

So it has been from the day of the festival of our freedom, when we raised high the flag of freedom and of banishing the chametz within us by fulfilling the word of HaShem, the Eternal Redeemer of Israel.

Let us preserve the freedom and observe the banishing of chametz and thus speedily bring the complete redemption.”

Rav Kook is teaching us that Pesach is a powerful opportunity and invitation to remove all the inner and outer  obstacles so that our freedom and holiness can express itself fully in all areas of life. May we merit to achieve this.

Prepared by Rabbi Itzchak Evan-Shayish, www.haorot.com, haorot@gmail.com . The translation above is based on Pesach Jaffe’s wonderful translation in ‘Celebration Of The Soul’. 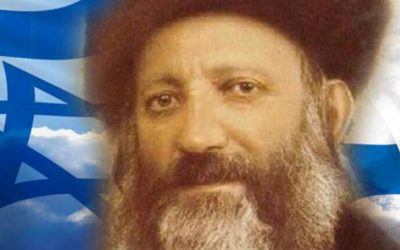