The Power of Complete Fulfillment

“The newest power that will be revealed in the world that will renew life with complete liberation is the great impact of the human will on the entire creation when it comes to its complete fulfillment. We yearn for this and all our actions are directed to reveal the Divinity in the human will. We develop and discover this through the elevation of humankind and the sanctification of their will. This is the prelude to the strengthening of will and the discovery of the Divine in the will itself. This raises us beyond all capability and skill and raises of the will to its very source.

And then everything is renewed in a great light, in new life, in new song, in nature renewed, new souls, new understandings, new feelings, visions of the world renewed, new wills, new confidence, in a new relationship to heaven and earth, to all existence, to humankind and to all creatures, to all aspects of life, to the revealed and the hidden, to spirituality and physicality, to life in the body and to life beyond the body, to limited and unlimited recognitions, to particular sparks and to universal lights, to all the vessels and all their contents. A new relationship to all existence will be fostered as we discover the full significance of the human will in reality”.  (8 Kvatzim-1:490)

THE LINK BETWEEN MAN AND EXISTENCE

“The world is waiting for the wondrous discovery of how man and the world are tied to each other.”

“In his song the human unites with all existence, with all creatures, with all the world and together with all of them he sings a song.”

Through the connection that a person feels to the world, they seek the source of all the creation and wish to unite themselves  to their source:

“We wish to elevate everything, the whole world, all the creatures, all the souls…we wish to unite their in the source of the light of life.”

The link between man and nature is mutual; not only are we responsible to nature, we also need it to reveal the will of the creator in nature so that we can live in an appropriate balance between us and the creation. As Rabbi Charlap (one of Rav Kook’s primary students) taught:

“As long as existence does not return to its primary harmony and in its full being testify to its Creator and Fashioner, then Israel will not find tranquility in the world.”

The Influence Of Man On The World:
The sages of Kabbalah described the relationship between the human and the natural realm in terms of “Igulim-circles’ and “Yosher-straight lines.’

The natural realm is called ‘circles’ because its on going constant repetition does not lead to a purpose, it continues to exist and repeat itself. This is contrasted to the human who as a ‘straight line’ demonstrates an above and below, direction, purpose and hope.

As Rav Kook wrote:
“In the realms of the ‘circles’ the laws of existence are necessary; the iron clad rules do not change their actions for any nation or person…it is in the realm of ‘the straight line’ that we see process and development…the ‘straight line’ is the most important in existence, the ‘circles’ are subservient to it and the absolute freedom of life is demonstrated through its connection to the source of life.”

Repetition and cycles operate in an absolute way. And because of the decree like nature of this, there can be no room for questions of ethics or morality. In contrast to this, the human realm of ‘the straight line’ enters into the dimension of good and evil. It has an ethical aspect and one can ask why a person did this or that.

In the most holistic perspective, the ‘circles’ are influenced by the ‘straight lines’.

The ‘circles’ spiral around the ‘straight lines’ and the natural realm is developed and improved by human behavior. The human has the responsibility to nature, not only to guard it but to develop and improve it.

The Role Of The Human In The Creation

Humans are not part of nature in the same way that other animals are. The human is the crown of creation and exerts influence on nature. The pagan perspective sees the human as submissive to nature and its powers. The natural realm dominates and the human is not able to transcend the structures of nature. The most they can do is dominate others within the realm of nature. Man is not free, but tied by the natural realm…

This attitude about man’s place and role in nature has contributed to the manifestation of phenomena such as Nazism and its ilk. The God of nature favors the one who is more strong. According to this man is forbidden from changing, in fact one must be their natural selves, wild and lustful.

Man is not limited by the system of natural law; he has the capacity to choose and to decide.

As Rav Kook teaches: ” One of the foundations of teshuva-penitence in the realm of thought is the recognition of man’s responsibility for their actions. This stems from the belief in human free will.”

The command to ‘serve and protect’ (Genesis 2:15) that the first human was enjoined when the Creator placed him in the Garden of Eden/Delight outlines for us what our place and purpose is in relation to the natural world. In the Book of Ecclesiastes/Kohelet we find: “See what the Creator has fashioned, who is able to straighten that which He twisted”. (7:13)

Based on this the Midrash teaches that “at the time that the Creator created the first human, He took him around all the trees and life forms of the garden and said to him: ‘See how pleasant and  delightful all of this is, I created it for you. Do not ruin and destroy my world for if you do there will be no one to come after you and fix it.” (Midrash Kohelet Raba).

END_OF_DOCUMENT_TOKEN_TO_BE_REPLACED Rav Kook gave expression to the Torah of Love transforming from the the Torah of Yirah-Awe/Fear that characterized the Torah during our long exile from Israel.

END_OF_DOCUMENT_TOKEN_TO_BE_REPLACED 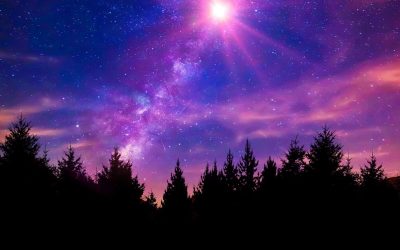 Radiant is the World Soul

The higher expression of tshuva comes about as a flash of illumination of the all-good, the divine, the light of the One who abides in eternity. The universal soul, the spiritual essence is revealed to us in all its majesty and holiness, to the extent that the human heart can absorb it.